The Parliamentary Under Secretary of State for Transport (Mike Penning):The Department for Transport has today published a consultation on a proposal to exempt vehicles of historic interest (vehicles manufactured prior to 1 January 1960) in Great Britain (GB) from statutory MoT test, as allowed under Article 4(2) of the EU Directive 2009/40/EC.

The EU Directive of the European Parliament and of the Council, Chapter II, Exceptions, Article 4 states: “Member States may, after consulting the Commission, exclude from the scope of this Directive, or subject to special provisions, certain vehicles operated or used in exceptional conditions and vehicles which are never, or hardly ever, used on public highways, including vehicles of historic interest which were manufactured before 1 January 1960 or which are temporarily withdrawn from circulation. Member States may, after consulting the Commission, set their own testing standards for vehicles considered to be of historic interest.”

Sections 45 to 48 of the Road Traffic Act 1988 provide the legislative basis for MoT testing.  The purpose of the MOT test is to ensure that cars, other light vehicles (including some light goods vehicles), private buses and motorcycles over a prescribed age are checked at least once a year to see that they comply with key roadworthiness and environmental requirements in the Road Vehicle Construction and Use Regulations 1986 and the Road Vehicle Lighting Regulations 1989 (both as amended). 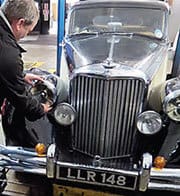 The Government believes that the proposed exemption will reduce regulatory burden on owners of historic vehicles, meet its Reducing Regulation agenda and the desire to remove unnecessary burdens. It will also bring the age of vehicles requiring the statutory MoT test in line with The Goods Vehicles (Plating and Testing) Regulations 1988, which already exempts unladen pre-1960 manufactured Heavy Goods Vehicles from the roadworthiness test.

The purpose of the consultation is to invite views on proposals to exempt vehicles of historic interest from the statutory MoT test in GB. In addition to no change, the consultation offers three options based on vehicle manufactured date, i.e. it seeks respondents’ views on whether the Government should exempt from the statutory MoT test, pre-1960, pre-1945 or pre-1920 manufactured vehicles.

The consultation also seeks respondents’ views (in all three options) on whether all vehicle categories and vehicles used for commercial purposes should be included in the exemption review.

The consultation will run until 26 January 2012. Copies of the Consultation Document have been placed on the Library of the House. Further copies are available on the DfT website at www.dft.gov.uk/consultations/dft-2011-27. Depending on comments received and the Department’s response, amendments may be made to regulations.

Minister Mike Penning has announced the proposal to exempt ‘classic cars’ from the MOT will become effective from November 18th 2012.

Over 30,000 Testers yet to complete annual training and assessment