Ross has been head of UK Sales at Boston Garage Equipment for the past ten years; a position which has now been extended to cover Boston export markets.

Previously his career has been entirely within the automotive industry, primarily in the field of engine technology. 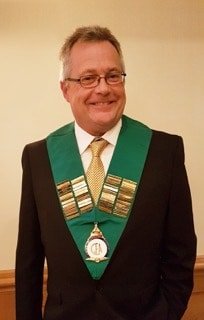 Having been on the GEA Council since 2011, Ross has taken an active role in the GEA cooperation with the DVLA in formulating equipment specifications and vehicle testing standards.

Speaking at the Annual GEA Dinner, he emphasized the importance of member companies sustaining the Associations high reputation in the light of recent shortcomings.

Some distributor sales representatives having become focused solely on sales where repairs and updates are sometimes a satisfactory and less expensive option. A less aggressive approach to marketing would maintain the professional bond between GEA members and end-users, and project the Association’s image as the industry’s leading authority.

The GEA is to consider a scheme for accreditation of sales personnel. This is aimed to test their knowledge. The aim is to include an understanding of the professional approach to selling capital equipment and existing code of conduct.

Ross will be asking for a review in relation to sales staff that represent GEA Member companies in the coming months.

Over 30,000 Testers yet to complete annual training and assessment