We recently received this letter from a reader of the magazine – unfortunately too late for publication in the February ’15 edition, but we will include it in the May edition as we consider it to be one of the most important issues connected with MOT Testing in the UK at the moment – price cutting and fee discounting, and the underlying issue of why the MOT trade bodies do not seem to be treating the matter as a priority.

In the meantime we will be following up on this matter with trade body representatives as well as DVSA to see if there is any prospect of change, and will report, with other comments, in the May issue.

Please feel free to leave your own comments below – any interesting views will be included in the Letters section of the May 2015 issue of MOT Testing Magazine.

We recently stripped our office for refurbishment and came across some forgotten files. In there was one labelled ‘MOT pricing Feb 1994’. I enclose some pictures which tell the true story as to how this industry and the hapless key players in it have well and truly shot themselves in the foot. 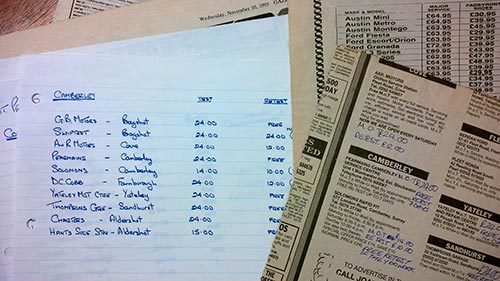 As you can see, the majority of garages local to me then were charging £24 a test (full fee) in late 1993, with a mixture of paid for and free retests, which was then, of course, a full retest.

My current garage is sandwiched between a Mr.Clutch and Halfords and guess what – you would think it’s the early nineties again (£25.00 & £29.95 for their MOT’s) respectively – 22 years later!

In that time, inflation (CPI) has increased by 56%! In addition, the test has mushroomed in complexity, the number of items and time taken, as well as testers wages plus all other costs and to add insult now I am spending my money on a computer and printer to continue to test.

Couple this with unchecked growth in test stations, no fee increase since 2010, is it any wonder that as you keep reporting, MOT test quality is getting increasingly poor, with all the attendant risks to vehicle safety as prices get cut to the bone. The issue of price cutting has been with us for years but now it is at dangerous levels.

Given the trade is still dominated by independent garages like mine, why are the so called trade associations like IGA, and others seemingly doing nothing about it. If they really cared about our welfare they would be putting a strong case together to government to stop this madness and fix the MOT price at a level that would suit all stakeholders.

The big companies can afford to cut the price as a loss leader and therefore ‘set’ the trade fee levels, but us small companies and the thousands of employees in them are being squeezed and no one seems to give a damn. Taking a leaf out of the current state of politics, may be what’s needed is a new group that will fight for us and will really look after the interests of thousands of independent test stations who want to do a good job and take pride in their work.

I am serious – given as you champion our trade why don’t you start one.

I would prefer it if you did not publish my details as I am a DVSA low risk garage and don’t want any issues.

Name and address withheld on request.

One Thought to “MOT price cutting and fee discounting”