Automatic Test Lanes have been with us for some time, yet they are still only to be seen in comparatively small numbers of Testing Stations compared to over 19,000 VTSs operating throughout the country. {reg}However despite VOSA having now decided to delay the mandatory introduction due to the threat of 4-2-2, they are still keen to insist that all Testing Stations must have ATLs eventually. Yet many Testing Station owners still think that it needs to happen by 2015 (having been told as much by ill-informed VEs) and are considering building extensions to enable them to fit ATLs – but such building work may be a waste of money in the light of VOSA’s latest thinking on future VTS requirements relating to ATLs. Here’s the story so far… 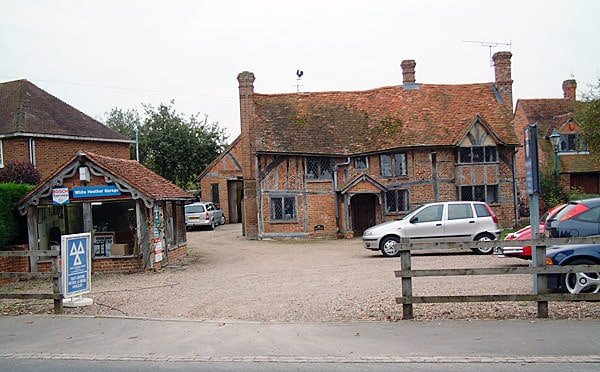 White Heather Garage’s owner Tom Williams from Berkshire lives in the 14th Century house in the foreground. Operating on ‘grandfather rights’, his Test lane has an inspection pit. A building extension would currently be needed for an ATL

The length of ATLs is governed by the conditions in the MOT Guide which is no different than a normal test lane except perhaps the need for longer vehicle lift runners to accommodate both turning plates and shaker plates. The problem, however, is that thousands of Testing Stations are operating on so called ‘grandfather rights’ so their test lanes are shorter than the current regulations would allow when setting up new Testing Station from scratch. The effect of this is that should they want to install an ATL, it would be impossible to do so given the length an approved ATL would take up – and in many cases their workshops wouldn’t be long enough. 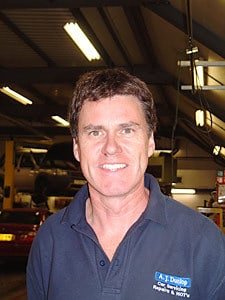 Alex Dunlop has a Testing Station in Beaconsfield (Bucks) with adequate floor space for an ATL but says “Currently I would need to modify the roof of my workshop to satisfy the ATL requirements”.

The solution, or course, would be to extend the workshop, but that may be impossible either due to site limitations, or because planning permission may not be forthcoming. Aware of the problem, VOSA visited our editor’s VTS earlier this year to measure the lanes there – and see if the regulations could be eased to enable VTSs on grandfather rights to install the components required for an ATL in more limited space – effectively a revision of the ATL regulations but not changing the specification of individual pieces of equipment. They visited that particular site both because our editor offered it, and also because it has three testing lanes of different characteristics (one pit and two conventional lanes) installed over the last 25 years at different stages of development of the regulations. This would provide VOSA with three different levels of ‘grandfather rights’ to investigate.

Let it all hang out…

Well not quite, but there’s an interesting anomaly in the regulations that could provide a potential solution to the problem. For Class VII Testing, not all the vehicle needs to be inside the building during the conduct of an MOT, whereas for Class IV Tests the regulations are written so that generally it does – and of course there are many more Class IV Testing Stations so many more sites are affected. Aligning Class IV equipment requirements with those of Class VII may well provide a way forward. But VOSA’s work is going further than that and they are thoroughly reviewing the whole of the appropriate section of the Guide including the minimum distances required between different pieces of MOT equipment. VOSA tell us that the changes should be finalised by next summer and perhaps earlier. So don’t rush to call your builders just yet, or apply for planning permission for that extension to take an ATL, it may not be necessary.

One person Testing is effectively an ATL without the computerised roller brake test machine – but you cannot take advantage of this and retro-fit shaker plates, mirrors and brake pedal depressing equipment to convert your existing lane to one person operation if your test lanes do not comply to the current regulations for new installations. So ‘grandfather rights’ test lanes are excluded. This seems very strange and effectively excludes older VTSs of taking advantage of one person operation. But if the new regulations, when they arrive do allow shorter ATLs, one assumes the same would apply to one person testing too, thus enabling those ‘grandfather rights’ VTSs to upgrade.

So why bother to buy an ATL when you could upgrade to one person operation at much less cost? Well the main difference is the system’s computer which is also linked to the roller brake (RBT) test equipment. This will automatically compute the vehicle brake performance and provide a print out. The automatic nature of the RBT operation also enables the brake check and performance calculations to be completed much more quickly by automatically going through the brake operation procedure and printing out the result. All the Tester needs to do is apply the brake when prompted by the system and await the resulting print-out. This saves time which soon adds up in a busy VTS. The key, however, to fully realising the potential of both OPTs and ATLs will be the more widespread use of Hand Held Devices (HHDs). There are currently two such devices on the market, both having been approved by VOSA/Siemens to download a Test result onto the main MOT Computer. A good HHD with appropriate menus and suitable prompts will significantly reduce time as the whole Test result is downloaded directly onto the device when the Test is completed. Jim Punter, editor of our subscriber publication MOT Testing has trialled the MOT Club’s version, and with just a couple of minor reservations – which the MOT Club believe they can easily ‘fix’ – his Testers were very impressed. This is certainly the way ahead for Automatic and One Person Testing.

So what to do? Well, if you have large premises with the requisite space and would like to fit an ATL, there’s nothing to stop you doing that straight away, and there’s a very good choice available in the market place. Alternatively if you have conventional test lanes which already comply with the current regulations there’s nothing to stop you from purchasing an ATL, probably the best option in terms of improving productivity. On the other hand, if the cash outlay for an ATL seems daunting, or your MOT volume is comparatively low meaning that the productivity gains from a full ATL would be marginal, you can purchase the appropriate equipment to upgrade to one person operation – although this won’t have the same advantages in time saving provided by an ATL. But for those without the space to fit an ATL, there are currently no options at all. You can neither fit an ATL nor can you upgrade to one person operation – we must all wait until VOSA have finished their deliberations, and that includes the equipment manufacturers and suppliers who must be equally frustrated.

Nevertheless next summer, when VOSA believe they’ll have finalised the new rules, isn’t that far away and now is the time to start planning for such large purchases – and irrespective of the regulations concerning distances between pieces of equipment, or whether or not the vehicle can hang out of the bay, the price shouldn’t be affected. So we have carried out a survey of the ATLs currently available so readers can have a look at what’s on offer and make good informed choices when those new rules are eventually finalised. In addition a full list of the approved ATL equipment can be found in the library section of: www.gea.co.uk , the Garage Equipment Association’ website, which is worth checking just to make sure that what you are buying has indeed been fully approved by VOSA.