Well, it has been a long time coming – but at last Zircon, the company empowered by Siemens to quality assure the hand-held devices (HHD) for connection to the MOT computer has issued its first compliance certificate to Motor Trade Technology (MTT) Ltd. MTT is a company with which Hugh Roberts, founder of the MOT Club is associated and he kindly took the device to our editor’s MOT Testing Station so that we could see it in action.

Hugh Roberts and MTT’s Manger and the project manager for the HHD Craig Clark arrived at the VTS with the good news that we would be able to do a ‘live’ Test using the device. All was not well, however, as despite Zircon confirming to MTT that the device had passed their checks and would now work at Testing Stations, it would not connect with the terminal to download the Vehicle Specific Information after the Tester had logged on…

A few frantic phone calls later and Craig discovered that Siemens had a software ‘block’ on every VTS terminal to prevent tampering with the device by connecting unauthorised equipment, and this had to be removed before the HHD could be used – something that Siemens had not yet done! 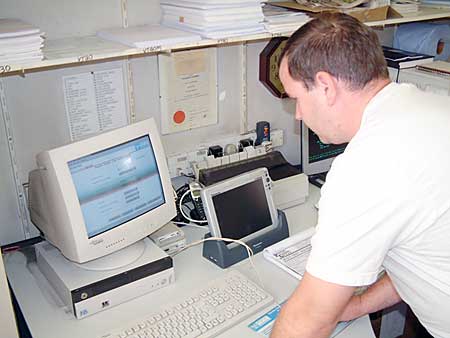 The Hand Held Device sits in a holder and is hard wired into the Siemens terminal for upload and download of the MOT result.

We discussed the issue of compliance and connectivity with both Roberts and Clark. This was, it seems, the first time the device had ever been connected to a ‘live’ MOT terminal. Apparently this isn’t part of Zircon’s compliance check process (why not? Ed). We raised our eyebrows at this – is this the hint of another problem like the 4-gas MOT computer connectivity issue? From the look on Hugh Roberts’ face we could see that he was thinking just what we were thinking – although we have now heard that this issue of connectivity has been resolved.

So what of the device itself, how does it compare to the SPX HHD that we looked at in our February issue in early 2008? Well, with regard to its software it is the same – SPX and MTT were at the time in a commercial partnership, although that has now ended. The big difference though is the hardware – whereas the SPX device was a small lap-top PC, the MTT device is based on Panasonic’s ‘Tough Book’ and is incredibly durable – in fact Clark kept dropping it to the floor to demonstrate the point – we requested he do it again for a picture – and he obliged, but we didn’t get a good shot, so we asked him to drop it again, and then again… We did eventually get our photograph, some ten ‘drops’ later!

The MTT device is mounted into a docking station which in turn has a connecting lead to the MOT device. 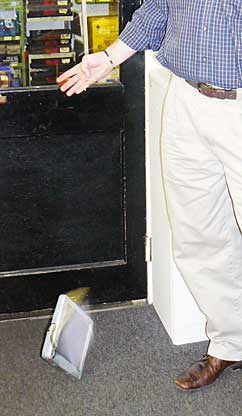 Craig Clark drops the Panasonic ‘tough book’ time and again so we can get a picture – it’s very tough!

Unlike the Siemens MOT terminal, MTT’s device is very user friendly and although, because it wouldn’t connect with the terminal, it was only a simulated Test which was pre-loaded, our Tester found it very easy to navigate through the programme. It can be easily pre-programmed for the route individual Testers take around the vehicle, and can store up to 80,000 MOT Test results which can then be downloaded.

Unlike the SPX device, as it isn’t a PC it cannot be used as such and operates of a different ‘windows’ system, windows CE – but that is the price of its durability; with it’s ‘hard’ drives a normal PC would be much more fragile!

Note: Since this was originally published in MOT Testing, the SPX device has had its software revised and will be shortly submitted for MOT approval and should be available summer 2009.

As its operating systems are pretty much the same as the SPX device we have already looked at (as they use the same software), all our upbeat comments made about the SPX device also apply to the MTT unit – in operation it is everything the MOT Computer should have been from the outset. It is, however, somewhat smaller and more compact, which addressed the strongest criticism we expressed about the earlier device, and more durable – and that durability goes beyond being dropped. It can withstand contamination with oil, water and has a ‘toughened’ screen to avoid scratch damage.

There’s no doubt about it, a hand-held device coupled with either an ATL or one person Test lane is the way ahead – just as soon as that connectivity problem is resolved!

Note: At the time of going to press we have discovered that more HHDs are becoming available. As they become approved for use by VOSA we will publish full reviews to assist our readers in making an informed decision as to the most suitable device to suit their needs..