Computer technology is playing an increasingly important role in the management of virtually all systems in modern vehicles. {reg}On-board computers are to be found controlling everything from simple engine ignition and fuelling operations, to complex ABS and Air-Conditioning systems. This technology is quickly being applied across the complete model lines of all the major manufacturers, mainly in response to local and worldwide emission and safety legislation. These standards, along with the drivers demands for ever-higher specification vehicles, means that on-board computers are the only methods of meeting these ever more stringent requirements.

With the array of comprehensive diagnostic tools that are now available, driveability problems can be found much easier than before. Using this new high-tech equipment effectively however does require at least a basic understanding of how both test equipment and vehicle computers read, analyse and control information and functions. The combination of test equipment and your knowledge can be a formidable force in vehicle diagnostics.

The fundamentals of electronic control

Vehicle Electronic Control Units (ECUs) receive signals from a number of sources. These sources range from fairly stable battery or ignition controlled power supplies, to sensors capable of producing signals which change thousands of times every second. Sensors normally detect physical changes in position, chemical composition, pressure or temperature and the information gathered is converted into electrical signals the ECU can understand and work with.

Information supplied to the ECU by each sensor is compared, both with other signals and with pre-programmed values built into the ECU’s memory. Based on these comparisons, the ECU produces its own signals designed to control the physical movement of components collectively known as actuators. This process can be compared with driving a car. Your brain, (the ECU) receives sight, sound and movement signals of what is going on around you from your eyes, ears and other “sensors” in your body. Your brain compares all these signals with each other and with what you already know about driving (memory), sending signals through your nervous system to muscles (actuators), which control the car’s speed, direction, gears etc. This process is repeated continuously. 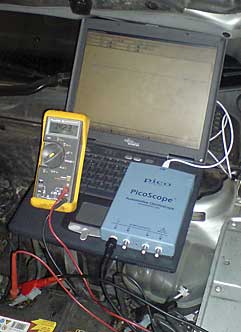 A diagnostic scan tool system can usually display signals using two distinctly different methods – using the vehicle’s “serial” connection (diagnostic connector) or through the use of probes connected directly to electrical circuits, often known as “parallel” testing. An oscilloscope is a measuring device that uses the parallel testing method.

Serial connection data is usually measured by the ECU and converted into a digital data stream before being sent to the serial (diagnostic) connector. This data can be displayed on test equipment often known as a scan tool, as voltage, temperature, speed measurements etc, depending on the signal type. Data can usually be displayed digitally or as long-term graphs. Serial information is useful for determining the presence or correctness of a signal and in comparing a large number of signals. In some cases however, the actual processes used by the ECU to convert voltage signals into digital data can affect the accuracy of the signal values, making it advisable to test the signals “at source”, in other words, “live”. The parallel testing method does exactly this.

The scanner function of a scan tool system is very good at helping you identify the problem area; the oscilloscope function is invaluable for identifying the specific problem within that area.

What does a ‘scope do?

Think of a ‘scope as a voltmeter that displays the voltage value as a line on a graph rather than a number on a screen. When a ‘scope measures electrical signals on a vehicle, it displays the measured voltage over a period of time. The signal trace displayed can be described as a pictorial representation of the voltage being measured, showing the signal both as it is now and as it was in the recent past. This is distinctly different to measuring voltage with a voltmeter, which only displays a digital value at brief moments in time. If the signal is changing very fast, a voltmeter will usually “average” the signal and display a voltage somewhere between the lowest and highest actual value. If the signal is changing more slowly, the voltmeter display will change continuously making it impossible to read accurately.

Only slowly changing or static voltage signals can be accurately displayed on a digital voltmeter. In all cases a ‘scope will be able to display the changes in the signal as they happen over a period of time. When the changes are repeated many times over as they are in for example, a vehicle fuel injection system, the pattern will be constantly updated or overwritten and it will appear to be almost static.

Using an oscilloscope allows you to examine a sequence of operations that happen far faster than your eyes would ever be able to follow in “real time”.

As an example, an injector in a modern fuel system can switch on and off 50 times per second at 3000 RPM with the voltage varying from 12 to 0 to 50 and back to 12 each time! With a ‘scope, the signal would be very clear but it would be impossible to see the changes using a voltmeter, which would display what would appear to be a steady voltage. This steady voltage display can very effectively hide from you any number of faults that would be very obvious when displayed on an oscilloscope!

In the next article in this series we will discuss the main display features of an oscilloscope including the voltage and time scales (and the setting of these), the trigger function and its correct use and how to connect a ‘scope’ to a circuit correctly.