Automated Testing Lanes (ATLs) have now been with us for some years. Initially, however, VOSA were very sceptical about whether or not shaker plates were able adequately to reveal wear in steering and suspension joints. Then, after carrying out a series of comparative checks using a ‘normal’ MOT Testing lane and comparing the results with those from using an Automated Test Lane, they became dedicated converts.

Shortly after, they agreed that shaker plates could also be installed in conventional Test lanes which, together with mirrors and the brake pedal depressor enabled One-Person Testing. Common sense prevailed; we get a better MOT check technically, and potentially higher productivity. All very sensible and sound – but there’s a glitch…

Dave McKimm, is a member of the MOT Trade Forum, and MOT Manager for National Tyres & Autocare, responsible for the operation of their 66 Testing Stations. At one of their sites operating on ‘grandfather rights’, (???) the vehicle lift was old, worn and needed replacement. He informed VOSA that he wanted to upgrade to a One-Person Testing Lane (OPTL) by installing a ramp with shaker plates. Initially VOSA said “No!” The walkways were 500mm wide and out of compliance with the new 600mm requirement.

He had a choice, they said, of replacing the existing ramp for one of an identical footprint and re-apply for authorisation to continue with two-man Testing (which would be refused due to the walkway problem), or change to a scissors lift to overcome the dimensional width problem and apply for authorisation as a OPTL both applications would be considered provided they met the new dimensional requirements.

The scissors lift option was discarded on the grounds of cost, so he refurbished the old lift – only to learn later, (after he had raised the issue at an MOT Trade Forum meeting) that he was wrongly advised by VOSA and that the new dimensional requirements would only apply if the authorisation changed from a two-man Test lane approval to OPTL or full ATL.

So Dave asks “Why should the new dimensional requirements have to be met if changing from a two-man test lane to OPTL or ATL, when already operating under ‘Grandfather rights'”. 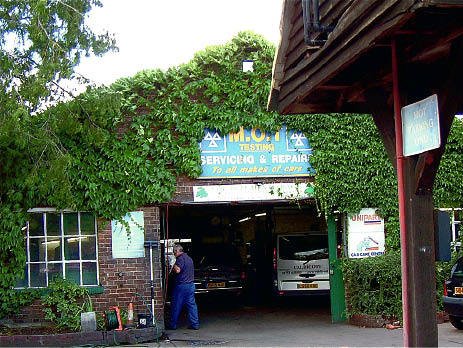 Thousands of small local MOT garages like this still operate on ‘grandfather rights’ and cannot use shaker plates to go to One-Person Testing – but if VOSA agree to our suggestion, they may do so in the future.

For reasons which nobody at VOSA seems to know, over the years MOT Test lanes got much longer, and with ATLs needing a ridiculous minimum length. So with hundreds (more likely thousands) of VTSs using lanes operating on so called ‘grandfather rights’, installing an ATL would have been impossible without extending the building. So a couple of years ago I suggested to VOSA that the length of a test lane should only be governed by whether or not it enabled a proper engineering inspection of a vehicle for MOT purposes.

Taking that idea on board, VOSA reviewed and revised the regulations and currently both ATLs and OPTs have a shorter minimum length than before. Yet for many VTSs with lanes first authorised perhaps decades ago, even that was too long (and some new provisions in these seemingly ‘easier’ regulations also excluded them) – so they continue to operate on ‘Grandfather rights’. And VOSA are content that a proper examination of the vehicle is being carried out using an assistant to ‘load’ the steering and suspension joints, and allow that to continue – and why not if the MOT check is satisfactory?

Yet it is quite logical to suggest that if, as VOSA believe, the installation of shaker plates results in a better examination in engineering terms for assessing wear in steering and suspension joints, then why can’t Testing Stations operating on ‘Grandfather rights’ with vehicle lifts that are long enough to accept shaker plates – simply install a new, suitable lift (with the same ‘footprint’ as the original), fitted with shaker plates? It’s simple common sense.

Going further, with mirrors and a brake pedal depressor, the old fashioned ‘grandfather rights’ lane now becomes a one-person-test lane, with improved productivity. And what if computerised roller brake test equipment can be ‘dropped’ into the original roller brake equipment recesses? It’s now an ATL with even better productivity and and even further improved by a better brake check. NO! says VOSA, it must now comply with the dimensions for a new ATL or OPTL authorisation – why?

The design of an MOT Test lane, equipment and layout, must ensure that a sound and thorough MOT check can be conducted. It is about sound engineering, together with ensuring that the installation isn’t so cramped as to prevent the Tester from carrying out that thorough ‘engineering’ MOT examination of the vehicle – clearly not a problem with ‘grandfather rights’ lanes, because if it was, VOSA would insist they are closed down.

Surely then, the best way for VOSA to ‘approve’ Test lanes is simply to insist a fully qualified, ‘Chartered’ engineer ‘signs off’ the Test lane on that basis?

This would not only take an administrative burden off VOSA’s shoulders, but would enable much more flexibility for Testing Stations with smaller more restrictive premises. There would also be more VTSs carrying out better MOT Tests at a higher level of productivity if they could install shaker plates and automated brake test equipment. Surely it is simple common sense, a win-win situation?

One aspect of the recent changes is wider ‘walkways’. A previous minimum width of 500mm is now 600mm – but why? “Well”, say VOSA, it’s because the Health and Safety Executive’s (HSE’s) “recommendation” for the minimum width is now 600mm.

Remember, this isn’t mandatory, otherwise all those VTSs with 500mm walkways (a hand’s breadth shorter) would be ‘shut down’ by the HSE.

As we hear so often on the TV these days from Prime Minster Cameron and sidekick Nick, there’s a new political and economic era. Lord Young has been appointed to conduct a review of Health and Safety regulations (to get rid of some of those nonsenses we too often read about), and companies will need more support in a harsh economic climate.

If VOSA do as we suggest and concern themselves only with ensuring that a qualified engineer has approved an ATL or OPTL as being satisfactory to conduct MOT Tests, and leave MOT businesses to ensure they are H&S compliant, (which is their responsibility) then that would be in the spirit of the new Government’s culture and policies with the following added benefits:

• VTSs on grandfather rights could carry out better and more productive MOT Testing.
• Equipment manufacturers will sell more of their products and contribute to the country’s economic growth so essential for economic recovery.
• It would reduce VOSA’s administrative burden on checking out new or revised Test lanes to ensure they comply with the current unnecessarily burdensome regulations, reducing Government costs.

In his interview with us, Alan Wilson was sympathetic to this idea. Of course the practicalities will need to be worked out, and VOSA will also need to go through a consultation process with the trade, including of course, Dave Garratt, the Chief Executive of the Garage Equipment Association before the project could be taken further. We have, however, already discussed this with Garratt, who, unsurprisingly is enthusiastic. Hopefully we will be able to report some positive progress in subsequent issues of the magazine.