We asked the GEA’s Dave Garratt to provide us with an insight into the latest beam technology, and a few tips on the MOT Test with regard to headlamps.

Today, vehicle headlamps are one of the fastest evolving areas in motor vehicle design, which is strange when you consider that lighting technology stood still for many years. I believe it’s the availability of computer designed Free Form reflectors, High Intensity Discharge (HID) lamps (now noted in the new MOT Manual) and Light Emitting Diode LEDs that’s allowing vehicle designers to dramatically change the shape and position of the headlamp …

So what has changed and how does this affect the equipment used to measure and adjust the beams height and position?

Let’s start by looking at the history of headlamp design:

The main components of a conventional headlamp are the bulb, reflector and diffusing lens. The bulb is normally of a halogen type, the reflector is a mirrored parabolic dish and the lens, which was sometimes known as a diffusion disc, assures asymmetric light distribution.

In 1983 Hella introduced a headlamp known as the “double ellipsoid” (DE). ‘Double ellipsoid’ describes the shape of the reflector surface, which focuses the light just in front of a convergent lens, so the headlamp acts like a slide projector and because of this the headlamp is often called a projection system. DE headlamps are smaller allowing more compact frontal vehicle designs.

Gas discharge headlamps use the “double ellipsoid” principle, with the halogen bulb replaced by a gas discharge device. The gas used is normally Xenon, because the light emitted by ionising Xenon is close to that of natural daylight and 20 times more light-efficient than Bromine, used with halogen bulbs.

To jump the 4-mm gap, thus igniting the Xenon gas, an initial electric arc of 30,000-volts is required, however once ignited it only requires 12-volts at approximately 40-amps to maintain the burn

The improvement to range (hence increased night-time visibility) that gas discharge offers can be best seen on this graph (distance along the bottom axis).

Because the light intensity is so high, a gas discharge lamp must never be allowed to dazzle, therefore they were originally only used to provide one beam. However, recently they are being used to provide both full and dipped beams and these duel systems are called “bi-xenon”. With bi-xenon units the dip-beam is normally provided by a solenoid, which operates a shutter thus blocking off the part of the beam that would dazzle an on-coming driver. Also to prevent the dipped beam from dazzling when the vehicle is loaded an electronically controlled automatic levelling system is required. This system consists of an electronic control unit, a level sensor or sensors and fast moving actuator motors on each headlamp. 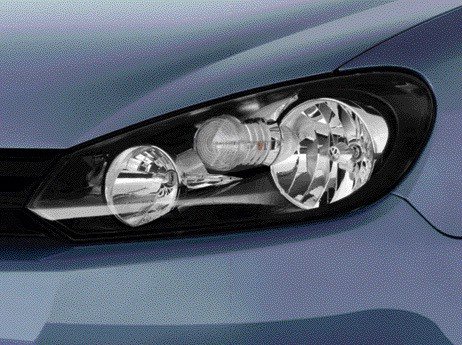 The free form headlamp (FF) utilises a shaped reflective surface, the shape is calculated and optimised by computer and acts to focus the headlamp which requires neither lens nor diffusion disc and with its ‘clean’ look is now very fashionable.

Adaptive headlamps allow the driver to see around the curve by either illuminating additional lamps or by pivoting the main headlamp. Most systems only light the additional lamps or pivot the headlamps when the vehicle is moving and the steering wheel is turned. Signals via the vehicle’s CAN-bus from the ABS’s wheel sensors together with the steering wheel movement sensor of the ESP system ensure this.

Adaptive headlamps allow drivers
to ‘see around the corner’
on dark winding roads. 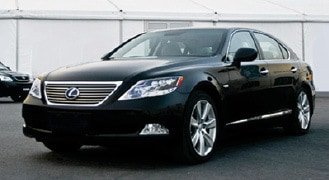 2008 LEXUS LS600h models were the first series produced vehicles with LED headlamps as well as low beam and position lamps all illuminated by factory installed LEDs.

LED’s have been used for high level braking lights for some years now, the main advantage being the quick response time and long service life. More recently vehicle manufacturers have been using LED’s for tail lamps; the LED or light emitting diode uses 40 % less power than normal bulbs which give big advantages in the race to reduce wire weight. Furthermore, LED’s are beginning to be used on the front of the car, for example, for daytime running lights. Ultra-bright white LEDs make sense for this application when you consider lamp lifetime, with daytime running lights being switched on for most of the car’s life.

The next step is a full LED headlight, or at least the low beam, made entirely of LEDs. LED headlamps can be up to 55% thinner than conventional headlamps; the narrow shape will free up space in the front of the vehicle and could allow designers to submerge the lights into the grille so that no lighting source is visible during the daytime. The first series-production LED headlamps were factory-installed on the Lexus LS 600h / LS 600h L starting with the 2008 models. Low beam, front position light and side marker functions are all performed by LEDs.

Whilst is essential when checking the headlamp aim, to follow certain rules to obtain an accurate measurement, for an MOT inspection this may not always be possible. Here are the list rules which should be followed …

Rules to be observed while checking or adjusting headlamp aim:

• The vehicle should be un-loaded
• Wheels in the straight ahead position
• Check tyre pressures are correct
• Look for uneven ride heights (broken springs)
• Check that the dashboard mounted, manual height control is in the normal (un-loaded) position.
• Follow the equipment manufacturer’s procedure to align the optical axis of the equipment with the longitudinal axis of the vehicle.
• Make sure that the centre of the headlamp corresponds to the centre of the equipment’s lens.
• Select dipped beam.
• Observe the image.

However, during an MOT Test some of these pre-conditions to obtain an accurate headlamp aim measurement may not be achievable, as follows:

For a vehicle with headlamps positioned at a height of 850mm or lower to pass an MOT, the beam image “cut-off line” of both lamps should be between the two red lines of the equipment’s screen; these are set at 0.5% to 2% inclination.

A vehicle with headlamps higher than 850mm should show the “cut-off line” between the equipment’s blue lines, which are at 1.25% and 2.75%

We have relied upon visual assessment of beam patterns for many years; however, the latest headlamps designs make it more difficult to visually check a beam pattern, which is due to many vehicle manufactures lowering the kick-up line to prevent glare back or by HID technology moving the so called hotspot of the headlamp. Also beam patterns are being designed to blend the light instead of simply cutting off the dipped beam, therefore assessing the height of the dipped beam cut-off line and the start point of any kick-up point is becoming difficult to do by eye.

Over the years, equipment manufacturers have developed various electronic assessment systems. Most use photocell technology, but lately we have seen video imaging becoming more popular. Today video imaging makes a lot of sense; it replaces the operator’s eyes with the lens of a video camera. The camera is position inside the beam setter, at the front, close to its light collecting lens.

Therefore the camera looks directly back towards the equipment’s aiming screen, just like an operator would, but because the camera is inside of the beam setter it suffers no diffraction from any glass top or distortion from viewing at an angle. The video image is fed directly into a processor that can compare the image to a series of patterns held in a data base. Due to the complication of modern headlamp design, this may become the only accurate way to test headlamp aim for MOT purposes in the near future.

All European homologated vehicles should have a sticker, normally positioned on the bonnet landing panel next to the headlamp, which indicates the correct inclination percentage. The headlamp should be adjusted to this percentage whilst on dipped beam. If the sticker is absent from the vehicle, the inclination percentage should be set to 1.3% if the headlamp is positioned 850mm above the ground or lower, or to 2.0% if the headlamp is higher than 850mm from the ground. By the way, main beams are normally 1% higher than this and fog lamps are set 1% lower.