For the year to 15th March last year there were well over 21,600 Vehicle Testing Stations (VTSs), conducting, over just under 27 million ‘first presentation’ MOT inspections. That’s a lot of Testing Stations and a lot of Tests – so who does what? Are just a handful of VTSs doing most Tests? Do some do hardly any at all? What about the large multiples, does their volume make a big dent in the market?

And what about trade bodies? How effective are they when communicating with VOSA and the DfT? Here the ‘Spotlight’ is on the MOT Trade; so let’s crunch some numbers…

Surprisingly, 2,192 VTSs do just one MOT Test or less each day, and 290 one Test a week or less. Why bother? It can’t be cost effective to retain the lane, with all the administration and expense. In fact, the bottom [in terms of volume] 10,000 VTSs only do just over a quarter of all Tests – 25.3%.

In contrast, the top 1,000 stations do 15% of all MOTs, and the top 25%, do almost half. The numbers for the ‘top’ sites are astonishing. The busiest MOT site did 20,165 ‘first presentation’ Tests last year! But strangely, only did 1,033 re-Tests, about 5% – how odd! Either there’s a lot of PRS tests in there, or the vast majority get a rigorous pre-inspection prior to MOT. In contrast, the second busiest VTS did 15,410 Tests, with a more realistic 35% fail rate. This makes more sense. 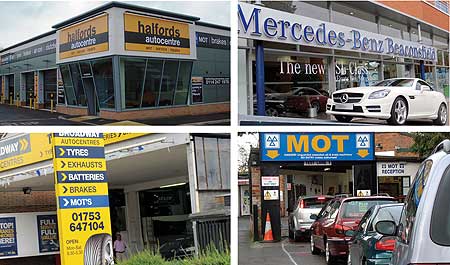 Because the MOT is an easy ‘bolt-on’ revenue earner for any business in the ‘motor trade’, they come in many ‘shapes and sizes’. Here’s our best estimate of their numbers:

All that’s reasonably certain, is that there are probably more independent garages than from any other sector.

Out of this, a lot of money goes to pay for the Testing Station’s overheads and direct costs (spare parts for repairs for example). So any loss of revenue for Testing Stations will have repercussions in the wider economy, especially local businesses supplying their needs.

As we know, discounting is rife. But how much discounting does go on? We asked VOSA if they have any information from their Site Assessments (SAs). They have – see table right:

The way in which they decide whether or not a VTS is scored from 1 – 5 is in the VE’s guidance notes for SAs shown in this table:

As VOSA include different percentages of re-Test discounting in their assessments, and we suspect the vast majority offer re-Tests free, these figures can confuse. It’s safe to say, however, that:

Over three quarters (76%) of Testing Stations charge less than £43.39 (more than 25% discount), with 10% charging less than £28.93 for each MOT Test.
If asked, what is their most important issue of concern, the vast majority of Testing Station owners would shout “DISCOUNTING!” It is extraordinary that Governments, over the years refuse to fix the fee, yet their own Agency, VOSA monitoring VTS performance, ‘mark down’ discounting Testing Stations in their ‘risk assessment’ process.

Historically, when MOT Trade representatives have urged Governments to fix the MOT fee and stop discounting, (even fixing it at a discounted rate), they have been ignored.

The garage equipment industry is an integral part of the MOT fraternity – MOT equipment is specified and defined by the Garage Equipment Association (the equipment makers trade body), and in most instances needs regular calibration – a significant cost to Testing Stations. Sometimes, tensions arise between equipment suppliers and Testing Stations. Annual upgrades for emission equipment seem excessively expensive for what they are, and ‘call out’ charges also sometimes seem high. But there is choice, so there’s always an alternative supplier.

Equipment suppliers do, however, support the MOT community as a whole. During the recent 4-2-2 ‘scare’, the Garage Equipment Association, supported the ProMOTe campaign against two yearly MOTs, and pitched in with some money too.