The MOT fee and discounting 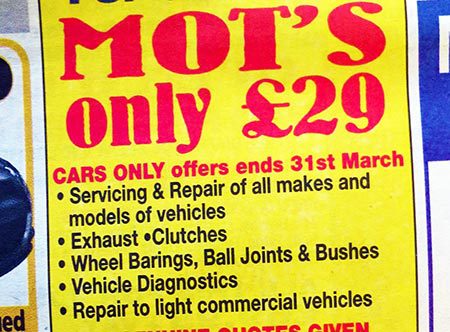 Widespread MOT Fee discounting has been cited by the government as one of the reasons that an MOT fee increase, or even a fixed MOT fee, is not needed.

The MOT Test is unique. It is supplied by private businesses to the public, yet defined, managed, and controlled by Government – including a ‘do this do that’ definition of that product, the equipment required, and setting a maximum price. Government employees directly discipline staff employed by Testing Stations!

The nearest equivalent is the NHS Prescription Scheme, but with key differences. One of which is that the drugs are ‘sold’ to end users at a non-discountable fixed price.

For Testing Stations, however, the price is discountable – to zero in some instances. Yet for both situations, ‘Public Safety’, is at the heart of the arrangement. But try asking your chemist for a discount off your NHS prescription! So how did a ‘discountable’ MOT fee structure come about?
Forward into the past…

The MOT legislation doesn’t say whether or not the fee is fixed or discountable. It is Government’s policy that the MOT fee is discountable, and nobody now knows how that fee was first set.

There’s a strange quirk in the MOT regulations which says that MOT Testing mustn’t be profitable. When the MOT first started up, the Government persuaded garages to take it on as a ‘cost only’ ‘public service’, expecting to profit only from the work generated – which, with the terrible condition of cars on the roads at the time, is what happened.

It is still Government policy today. Here’s a quote from the 2011 consultation document about exempting older cars from the MOT:

“Originally, the cost of the MoT test was calculated using the actual (average) time to conduct the test, the average labour cost rates and the recovery of the investment required to provide and equip a garage to DfT/VOSA specifications. As there is no direct profit element in the MoT test and it is purely a cost to MoT test providers, we assume that there would be no impact on the 20,000 plus MoT test centres if the pre-1960 manufactured vehicles (which accounted for less than 0.3% of initial MoT tests in 2009) are exempted from the MoT Test.”

Here’s a fundamental road-block to any future rational assessment of the MOT fee, which must be addressed. Whilst the MOT fee hasn’t been objectively assessed and calculated since the Scheme started in the early 1960s, there was a timing exercise in 2005/6, following MOT computerisation. The outcome demonstrated that the time taken to complete an MOT Test from first contact with the customer to the customer leaving the Test Station had increased. A significant fee increase in 2006 resulted – since then it’s fallen well behind inflation.

By now the MOT will be over £10 below what it should be had it kept up with inflation since 2005/6. Yet there are now numerous extra ‘Testable items’ – more time taken, more cost. Yet recently the Minister cited “discounting”, to justify extending the fee freeze until April 2015.

Now, let’s focus our spotlight on the cost, value and price of the MOT Test.

Value: What is the value of the MOT to society? It costs motorists time and petrol to visit a Test Station and buy an MOT. Is it worth it? Yes! In 2008 the DfT calculated a figure by imagining there was no MOT Scheme, and assessing the cost of increased road accidents (including deaths and injuries), and setting that against motorists’ savings by not needing an MOT. They calculated the net benefit to society as about £4.5 billion a year – a significant contribution to the country’s economy.

Cost: The total cost of conducting an MOT Test has never been accurately assessed. Yet, the hourly ‘labour rate’ charged for repairs and servicing must be a good starting point. Even for small independent companies, that would be more than the current £52.80 fee (after the slot fee) for an hour of the Tester’s time (the time of an MOT). Another, perhaps more realistic assessment would be to cost an MOT at a ‘stand alone’ Test Station – adding up all the operating costs and overheads involved.

The low ‘headline’ price of an MOT, and accounting for discounting means most Test Stations would get more from repairs, so unsurprisingly Testing is used as a ‘loss leader’, to increase ‘footfall’ into businesses. For dealerships, if money is lost on every MOT, better to give it away ‘free for life’ on new cars, and sell more cars. ‘Fast-fit’ outlets’ profitability is highly dependent on spares sales, so they heavily discount MOTs – more Tests, more failures, more spares sales. The losers are the small independents, over 75% of all Testing Stations, who have to discount to compete, but can’t spread their overheads over a number of outlets. Historically at seminars they repeatedly ask VOSA (now DVSA)staff why the MOT fee isn’t fixed.

That £4.5 billion ‘value’ of the MOT to society (in 2008) contains two underlying implications. It assumes Testing is done correctly at all times, and that, knowing an MOT Test is inevitable every year, motorists will better look after their vehicles as a result. Neither of these assumptions is entirely true.

Poor MOT quality: Poor ‘MOT Testing’ quality was lamented by the then Secretary of State for Transport Justine Greening in 2011, saying that, ‘…something must be done’. Yet the latest MOT error rate is still 28.5% (now 30.3%). So what could be done? Improved training for a start. Five yearly refresher training isn’t enough. With a fixed fee providing Test Stations with reasonable profitability, they could take more financial responsibility for training. The same applies for automated equipment, which we are told would also improve MOT quality. But that’s not all. The ‘risk assessment’ process starves the Scheme of Vehicle Examiners available to better assist Green Garages – just an extra quid on the ‘slot fee’ would solve that problem!

Regular vehicle maintenance: In that 2008 report into the MOT, the MOT failure rate was at 35%  Now it is over 40% for Class 4 vehicles first presented for an MOT; but it is worse than that! The latest ‘Compliance Report’, shows the actual failure rate at 48.5% if all pass/fail results were correct. When Testers get it wrong, they’re more likely to pass a fail than the other way around. So nearly half of all vehicles fail the MOT on first presentation – something for which the Minister, and the DVSA are directly responsible. ‘Hold on!’ you might say, ‘that’s up to the motorist, what can he do?’ Easy. With discounting down to zero, and free re-Tests at so many Test Stations, where’s the incentive for motorists to make sure their vehicles pass first time? Even if the Minister set a lower but fixed fee price, and mandated that a re-Test fee must always be paid, motorists would probably be much more aware of their vehicles’ condition…

Poor quality MOT Testing potentially threatens road safety, as does the discounting and ‘free re-Test culture’ which encourages poor vehicle maintenance. Isn’t ‘road safety’ the reason why we – including remember, DVSA and DfT staff, do what we do?

Do you discount? Would you prefer not to? Do you do it in response to the National ‘fast-fit’ discounters’ What do you think about dealerships offering ‘free MOTs for life’? Is it right that a ‘road safety’ inspection is used as a marketing tool? Surely cheap MOTs, and in particular ‘free re-Tests’ discourage motorists from carrying out regular maintenance?

And what about the DVSA – why don’t they have the resources to assist ‘green’ garages as well as time consuming ‘risk assessments’? Shouldn’t the ‘slot fee’ be increased so they can better do their job of monitoring and controlling Testing Stations? The DVSA are keen for Test Stations to have Automatic Test Lanes – but with discounting, where’s the money coming from? And what would an MOT cost if, like in most of Europe, Britain had ‘stand alone’ Testing Stations not allowed to conduct repairs as well as MOT Testing?

Setting the structure, nature and amount of the MOT fee (including the slot fee) is the Minister of Transport’s responsibility, yet with all these difficult, and sometimes embarrassing questions, coupled with 28.5% (Now 30.3%) of MOT Tests not done properly, and nearly half of cars found to be unroadworthy, arguably, in public safety terms he’s not making much of a fist of it… and freezing the MOT makes matters worse, not better!

Yet all is not lost. When recently discussing modernisation, the DVSA, for the first time ever, noted that Testing Stations need profitability. And, for the first time since the MOT Test started, the Minister is going to calculate the cost of carrying out an MOT Test. These two factors represent a watershed, both in terms of upgrading the MOT Scheme, but also in terms of how the fee is structured and applied.

But as noted in the lead article on the February 2014 edition, (‘Modernising the MOT’) modernisation isn’t just about technology and equipment. We know that the Government – both the DVSA and the DfT, are looking closely at the ‘slot fee’. It is a simple but blunt instrument to fund the DVSA’s MOT activities. DfT and the DVSA are at least considering the possibility of alternative funding models. An annual fee, perhaps, for being part of the MOT ‘franchise’, (just one example) – perhaps ‘scaled’ to variables like disciplinary history (bad VTSs cost more to monitor and control), with Test volumes factored in as well.

Yet whatever the Government eventually does in assessing and modernising the MOT Scheme – for the new computer in 2015 and beyond, they must realise that providing Test Stations with an appropriate revenue stream is an absolutely fundamental foundation for the positive and beneficial development of the MOT Scheme into the future.

Since this article was first published in February 2014, the Department for Transport have embarked on a project to assess the true cost of running an MOT Testing Station on a ‘stand alone’ basis. The work is ongoing – but nothing will happen on fees until after the forthcoming General Election.