Fitting a new ATL or OPTL

As everybody knows, business was difficult after the banking crisis of 2008/09 – although whether it was the banking problem, the Government’s ‘scrappage’ scheme, or motorists ‘holding back’ on spending which caused the drop in business in our area was difficult to tell. One thing was for certain though; with discounting increasingly prevalent and trading difficult, the last thing I was thinking about was investment in new equipment.

But during 2013 things began to improve. So when the business’s main MOT vehicle lift failed and the lift engineer flagged up the need for a new set of ropes as well as other issues, I decided to look into installing an Automated Test Lane (ATL). 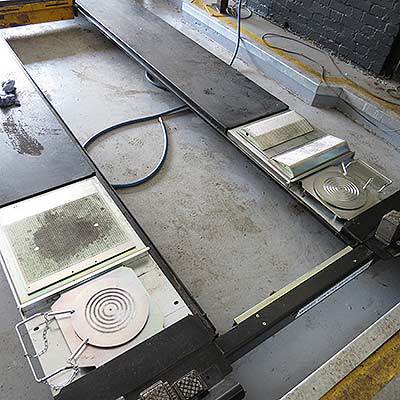 Here’s what it’s all about: the shaker plates enabling steering and suspension, bearings and bushes, to be inspected without an assistant.

It soon became clear that the biggest obstacle was going to be the shallow design of the existing lift – the only lifts available with shaker plates for automated operation which would fit directly into the existing recess in the floor were too narrow to take larger vehicles. That meant that ground-work to deepen the recess in the concrete to take a replacement lift was inevitable – significantly increasing cost and inconvenience.

But how to choose a supplier? When making a large investment, it’s hard to know who best to approach to supply the new equipment. First I looked at our own product reviews, and made some telephone calls. Then, on the basis of the size specification I needed, and cost issues, I narrowed the choice down to a handful of suppliers.

By chance one of these suppliers already contracted our routine maintenance on our existing vehicle lifts, so I asked them to ‘measure up’ and provide me with a quote for a new ATL.

On surveying the site, however, we found a problem. Due to the proximity of a wall and the adjacent vehicle lift it was impossible to comply with VOSA’s minimum distance requirements between adjacent equipment. Nevertheless, a set of plans were drawn up for a new ATL, which we submitted to VOSA (as it was then) for approval – requesting a dimensional ‘easement’ regarding the adjacent wall and lift. The local VE came along and measured everything to make sure it all tallied with the plans. He was very helpful, and, after a nail-biting moment agreed the easement, but noted that we would require a new headlamp tester to comply with the latest requirements.

Total price, however, was a problem. Not regarding the equipment itself (I had obtained several quotes and this one was very competitive), but the cost of the ground work for the new lift and to excavate and ‘make good’ the deeper recess required to fit automatic roller brake test equipment pushed the project cost beyond my budget. Then, unexpectedly VOSA revised the pass/fail requirement for the roller brake test, which meant that automatic brake test equipment could not then be used in ‘automatic’ mode.

So I thought that perhaps it would be a good idea to do the project as a two-stage process. First, install a new lift with shaker plates, together with the new headlamp tester, but using the existing roller brake test equipment to achieve one-person-Testing, then, at a later stage install automatic brake test equipment for a full ATL. 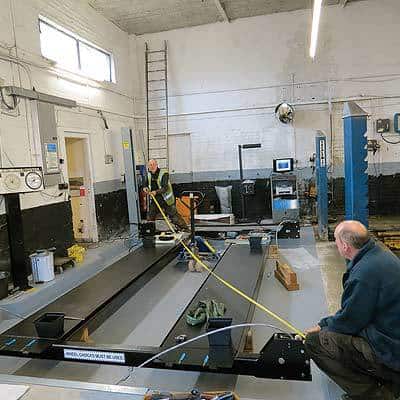 The lift engineers accurately measure the precise position for the new vehicle lift.

To change from an ATL to an One Person Test Lane (OPTL), however, needed new plans from the supplier, and another approval from VOSA. Both VOSA’s VE and our supplier showed much patience with me on this – so new plans were drawn up and approved for an OPTL by the VE. To my surprise, however, when I compared the two sets of plans – ATL and OPTL – whilst the centre line for the new OPTL was exactly the same as the current lift, so that it aligned with the existing brake rollers, to turn it into an ATL would require both the lift and the new automatic roller brake test equipment to be displaced to one side by 130mm before it would be approved by VOSA, a mere hands breadth… which struck me as rather nit-picking and petty – more of which later!

Nevertheless, we went ahead with the OPTL project… including the building work. Our supplier suggested that I could save some cost by getting my own local builders to do the excavation and concreting. I looked into that, but for the marginal difference, I reckoned that if they controlled the whole project, using their own builders with experience at that sort of work, it would be more likely to run smoothly.

No matter how good the builders are, excavating a deeper recess, removing the spoil, installing shuttering for the concrete and pouring it in, is disruptive! The problem, however, was, that whilst the period just after Christmas is our quietest time of the year and the best time to minimise any business disruption, the low temperatures weren’t conducive to the concrete setting quickly.

Digging-out took time. They had to dig much deeper than just beyond the existing concrete base for the old lift because modern lifts with shaker-plates need deeper foundations due to the inertial loads during operation. Eventually the concrete was poured – but due to the cold weather hadn’t set in time for the date specified for the lift to be installed. The concrete was still ‘green’ as they said, and needed more time to fully set. However, albeit a couple of weeks later than planned, finally the lift was installed and is now operational.

Too much red tape…

As ever with such projects, looking back it doesn’t seem quite as disruptive and difficult as it felt at the time. And the new facility has improved the business, although not just in terms of productivity. Quite often when the workshop is busy and we need to slot in an extra MOT for a customer and the main MOT lane is already busy, it is much more convenient to only have to take one person out of the workshop which could be quite busy, rather than two, due to the need for an assistant.

The Government still says they’re very strongly set on reducing red tape with their ‘Red Tape Challenge’; so why are the MOT regulations on where the pieces of equipment should be placed relative to walls posts and other pieces of equipment so millimetrically nit-picking?

Currently when it comes to approving equipment so that it can be used for MOT Testing, the DVSA have delegated that to the Garage Equipment Association (GEA). So why can’t the same apply to the layout and design of MOT Test Lanes, with the GEA approving their supplier members to do the work provided they have been appropriately trained and ‘certified’? Only two criteria need to be applied:

• In engineering terms can a proper MOT inspection be undertaken using the proposed MOT lane?
• Can that inspection be conducted in a safe manner?

This would reduce the DVSA’s own costs, making the whole process more simple and easy. And it’s pretty much what happens already. Most suppliers of complete MOT lanes will already measure up your workshop and design the whole thing for you, together with full working drawings for submission to the DVSA. What an easy way to sweep aside a completely unnecessary swathe of red tape! 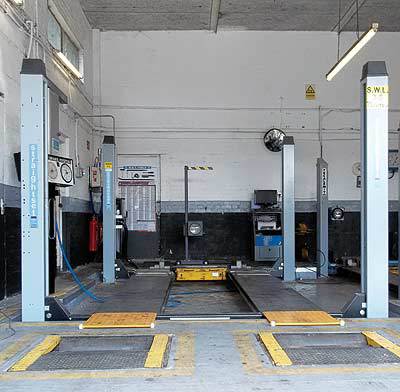 Finding an ATL or OPTL supplier…

If you are considering fitting an ATL or OPTL, having decided the kind of equipment you require – four-post, or scissor-lift, for example, first, have a look at our review of these products in this magazine which should give you some idea of which companies to approach. Then pick up the phone and make some enquiries. This will greatly assist you to make a more informed choice.

Looking back, the hardest decision was choosing the lift itself. I made a point of seeing an identical lift that the supplier had recently installed in use  before making the final decision. Also, if you don’t know the company you intend to use, their membership of the Garage Equipment Association provides a degree of confidence. And finally… if excavations are required, believe me, it will be more disruptive than you ever expected.