Britain has the safest roads in the world after Sweden, the number of annual fatalities on Britain’s roads having declined significantly and progressively since the early 1960s when the annual MOT Test was first introduced for vehicles over ten years old – 1967 the current system of a car’s first MOT being when it is three years old took affect (3-1-1 Testing).

Unfortunately, however, that steady declining death toll has reversed in recent years, increasing by 4% from an all time low of 1,713 in 2013 to 1,775 last year.

Yet that decline in road deaths cannot be solely attributable to the MOT Test, with other major factors coming into play. For example in 1965 an American journalist and consumer activist Ralph Nader published a book called Unsafe at any speed strongly criticising American and other vehicles which he claimed, had design features likely to increase deaths to both pedestrians and the car’s occupants following road traffic accidents – kick starting a significant change in vehicle design regulations world-wide, including the use of seat belts, which has significantly reduced the likelihood of both deaths and serious injuries of those involved in road accidents.

itself, certainly in Britain has also made a major contribution to a drop in annual road deaths from a post war peak of about 8,000 in the mid nineteen sixties to less than 2,000 by 2011 to a low of 1,713 in 2013. Looking at the graph there’s a significant slow down in the rate of increase of road deaths after 1960 when the MOT Test started, and an almost immediate tumble – especially after that 1967 change to 3-1-1 Testing.

Whilst people dying in British road traffic ‘accidents’ is tragic, and the numbers, even at their lowest are horrifying, even more people are seriously injured; 22,807 in 2014. Yet whilst the greatest cause of deaths and injuries on the roads stem from ‘driver error’, many are still caused by vehicle defects. So, is it possible to estimate how many of these deaths and serious injuries are attributable to vehicle defects causing the ‘accident’ in the first place?

In Britain there’s little ‘hard’ information about how many road traffic ‘accidents’ are caused by vehicle defects. In 2008 a Department for Transport report called The MOT Evidence Base considered the likely affect of moving to two-yearly MOTs, with the first at four years old and identified a problem into how the causes of road traffic accidents were assessed, noting that published figures were
“…only based on a limited visual assessment of obvious defects by police officers who attend personal injury road traffic accidents…”

and it could have added that those figures are only assessed following fatal accidents.
These ‘official’ figures suggest that about 3% of all fatal accidents are caused by vehicle defects. The problem is that if the investigating police officer sees a more obvious cause, a drunken driver for example, then that’s identified as the main cause. Yet even a sober driver may have had the same accident if in fact a vehicle defect was the underlying cause – which inevitably flaws the data.

In Germany there is better information. A statistically sound number of vehicles are inspected following road traffic accidents involving personal injuries to see if a defect were responsible. Cited in the DfT’s 2008 report, at that time in Germany 10% of such accidents were caused by vehicle defects. By 2014 the figure was 11.3%. But in Germany other factors come into play, not least of which is that their MOT Test is once every two years.

So the only reasonable conclusion that can be drawn from the available information is that the number of accidents resulting in death and/or personal injury caused by vehicle defects in Britain is almost certainly more than 3% of all fatal accidents, and could be as high as 11% – as in Germany. So it’s quite plausible that following road traffic accidents in 2014, of the 1,775 people who died in road traffic accidents, between 53 and 178 people died as a result of vehicle defects causing the ‘accident’ – and between 684 and 2,280 people received serious injuries – also caused by vehicle defects.

The vast majority of MOT Tests each year are of Class 4 vehicles – cars and light goods vehicles – almost 27.5 million in 2013/14 with just over a million motorcycles and 600,000 Class 7 heavier goods vehicles. Of these, motorcycles have the lowest failure rate at just under 20% when first presented for MOT Test. For Class 4 vehicles it is about 40%, varying only marginally in the last few years, although it was at around 36% in 2008. On the other hand about half of all class 7 vehicles fail the MOT on first presentation.

Unsurprisingly the main reason for vehicles failing the MOT in all classes is ‘lighting and signalling’ although the next highest failure defect for Class 4 vehicles is suspension (12.8% of all vehicles Tested), and alarmingly on larger Class 7 vehicles it is brakes, where nearly one vehicle in four tested had a defect (22.6%). 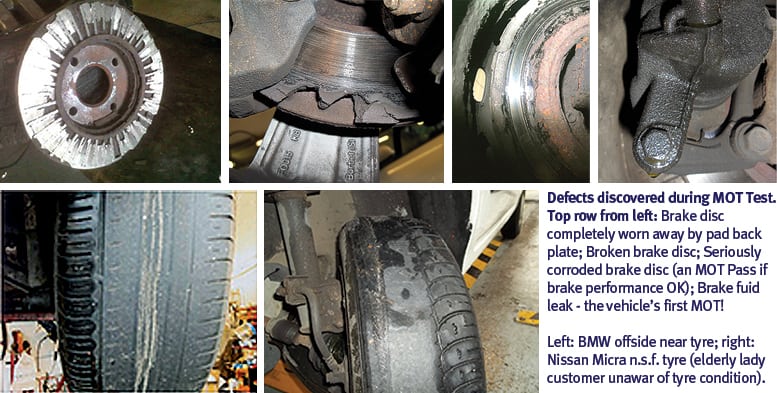 But not all MOT failures result from safety-related defects – with some defects having a more direct affect on road safety than others. A bald tyre is much more likely to cause an accident on a wet road than, for example a single lengthy crack across the windscreen. So let’s look at some safety critical defects and how many failures result from those. Here are what we believe are the key categories:
• Brakes • Steering • Suspension • Tyres

For Class 4 vehicles, 34.3% of vehicles fail on one or more of these items, and for Class 7 it is 37.13%. So, on these key road safety critical areas over a third of Cars and light commercial vehicles carry a serious safety related defect when first presented for MOT, and nearly four out of ten larger Class 7 ‘light’ commercial vehicles.

That’s nearly 9.5 million Class 4, and almost a quarter of a million Class 7 vehicles carrying serious safety related defects when presented for MOT. The vast majority will have those defects remedied before being issued with a pass certificate. Here, perhaps is the real insight into the MOT’s contribution to road safety. It is also a sobering thought that over a third of all the vehicles on the road submitted for MOT Test have key safety-related defects at the time of the Test.

Yet we’ve not even considered the biggest threat to road safety – vehicles which during an MOT Test are found to have defects which MOT Testers believe renders them ‘dangerous to drive’.

Currently when an MOT Tester fails a car following its MOT inspection, there is a facility on the failure screen to identify the defect as rendering the vehicle ‘dangerous to drive’. This is not, however embodied within the MOT regulations, there being no specific definition of what type of defect, or how extensive a defect has to be to for it to be labelled as ‘dangerous to drive’. It is for each Tester to decide.

In 2013/14 for Class 4 vehicles there were over 770,000 such dangerous defects recorded, a little up on the previous year (2012/13), but less than the 813,000 noted in 2011/12. Whilst these figures are ‘official’, they are only a subjective assessment by MOT Testers. Even so that means there are over 2,100 vehicles discovered every day with defects which MOT Testers believe would render them dangerous drive.

In 2018, however things will change with the introduction of new EU regulations into Britain’s MOT Scheme wherein the term ‘dangerous to drive’ will be officially defined. In road safety terms, either officially or unofficially, that such a system of recording ‘dangerous’ defects exists must significantly enhance road safety by being a significant ‘wake-up’ call to the motorists whose vehicles are declared ‘dangerous to drive’.

Another issue involved in any analysis of how an MOT Testing Scheme affects vehicle accidents caused by defects, is the motoring ‘culture’ in the country concerned. A simple example of this is the fact that whilst Britain has one of the highest failure rates in the EU, it is also one of the few countries which has an annual rather than biennial Test – and also the second lowest accident, serious injury and death rates worldwide; which seems counter-intuitive. But Britain is also one of the few countries in the EU where MOT Testing and vehicle repair can be carried out at the same business.

So in Germany and France, for example, motorists have to book an MOT at a stand-alone MOT facility – which could be days or weeks in advance. Unsurprisingly then, French and German motorists are much more likely to ensure that their vehicles are thoroughly checked out in advance of going to a Testing Station to ensure they get an MOT pass – as a failure would result in considerable inconvenience of getting the work done, then re-booking another Test – which would apply even if the problem is just a bulb!
In Britain, on the other hand, motorists can leave their vehicles at the Test Station for repair and re-test if the failure takes time to be repaired. And if the failure is a simple thing, like a blown bulb or replacement wiper blade, then the PRS system enables the defect to be remedied then and there almost instantly – done and dusted, drive off with a new MOT!

So clearly, the system in those countries with only dedicated Test bays inevitably disguises a much higher initial failure rate as the vehicles have the defects fixed prior to the MOT inspection.

Whatever the actual figures would be though, given what we’ve seen here, the Government’s cavalier attitude to the MOT Test is difficult to understand. Whichever way you look at it, diluting the MOT by deferring a vehicle’s first Test until it is four years old is bound to result in an increase in road deaths and serious injuries – up to 24 more dead people in additon to the existing fatalities, and 147 seriously injured people in addition to the existing injuries, some confined to wheelchairs – all as a direct result of deferring that first MOT by a year.

Frankly it is outrageous; dead people, seriously injured people, just to save a few motorists buying brand new cars a ‘once off’ fifty quid, (or less!), because their road fund tax has gone up!

It is astonishingly irresponsible, foolish and heartless – unless of course, viewed, as it clearly is by our Chancellor of the Exchequer, from the most disgracefully cynical of political perspectives.

The most extensive report assessing what would happen to road deaths and injuries if the date of that first MOT were changed is the 2008 DfT report which estimated that deferring Class IV MOTs for a year would result in:

“… with respect to the number of defects and the number of dangerous defects which have not been accounted for… if they had been, it is likely that more casualties would have been predicted…”

So DfT’s estimates for increased deaths and injuries resulting from deferring a vehicle’s first MOT for a year (currently on the Government’s agenda) are probably the best estimates available and realistically the lower estimate of 24 more deaths and 147 seriously injured people is probably closer to the mark.