Carrying out your own repairs for the MOT 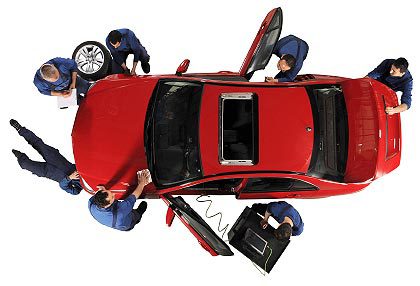 There are inevitably some pitfalls facing even a skilled DIY motor mechanic when it comes to repairing MOT failures, which largely break down into the four areas of

So let’s look at these in turn: 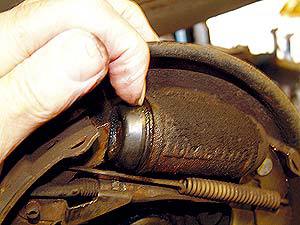 A ‘weeping’ slave cylinder. This is potentially dangerous, but the MOT Test would not discover this as the Tester is not allowed to dismantle any component.

There are a number of reasons that a vehicle can fail the MOT on brakes. There may be a brake fluid leak, the brakes may have an imbalance causing the vehicle to veer to one side or the other during braking. The efficiency of the brakes may be inadequate for the type of vehicle, flexible or metal brake pipes may be defective, or some other mechanical element in the braking system could be worn excessively.

As has been noted elsewhere, the MOT can not provide a comprehensive examination of the brakes. During an MOT Test the Tester is not allowed to dismantle components – and it is quite possible for there to be a latent defect within the brakes which would merit a failure but which the Tester cannot detect during the MOT and isn’t flagged up by the braking performance – slightly leaking brake cylinders within the system is just one example.

However there are a number of fairly straightforward jobs which can be carried out by an experienced DIY mechanic. Changing brake shoes or pads for example.

The problem here is that after the repair the DIY motorist cannot check the brakes in the same way as the Testing Station – with the use of a roller brake test machine.

So following that hard weekend of car repairing, the result of the brake re-Test could be a failure due to an unexpected fault detected by the brake test equipment, which may not necessarily show up when the vehicle is driven. And don’t forget, a braking imbalance which might feel only very slight on a dry road, could be disastrous in the wet.

Provided it is relatively simple, like changing track rod ends or the like, then there’s no reason why the ‘home repairer’ should not carry out straightforward repairs following an MOT failure. However there is another consideration – without accurate tracking equipment, should the tracking not be correct when the defective components have been replaced, then accelerated tyre wear will result – this may not be evident until considerable wear has resulted – so such a repair could be a false economy.

Here the DIY mechanic could face problems – especially on more modern vehicles. Most emission problems will need sophisticated diagnostic equipment to discover what the problem is before it can be rectified – and even then, without the gas analysis equipment used in Testing Stations it would be impossible to be sure that the problem has been solved. However, any reasonable sized non-MOT garage would probably have this equipment. This is an area which the amateur would best be advised to steer clear of.

Welding is less likely to be tackled by a DIY mechanic, but can have pitfalls if it is done by a repair garage which is not also aware of the MOT specifications for welding repair. The technical requirements of VOSA (the government agency which administrates the MOT) regarding what can be repaired by welding and what can’t, as well as the way in which the welded repair is done, are quite precise – and non-MOT garages do not always have this knowledge.

They also tend to cover their work in thick underseal which obscures the weld so the Tester is unable to examine the repair properly.

For these reasons it is always better to have a Testing Station carry out welding work, or if not then ensure the person doing the work does not cover it in underseal until after the Test, or if after a failure, the re-Test has been done.

The MOT and DIY car repairs

At MOT Testing, every year we update our ‘Car Owners Guide to the MOT’ poster. This gives motorists a better insight as to what is involved in the MOT Test so they can carry out some simple rudimentary measures before submitting their vehicles for MOT. Like topping up the washers, inspecting the wipers and checking the windscreen for cracks to provide just a few simple examples.

What are the pitfalls if any, and are there some jobs which are inevitably beyond the average DIY repairer which the amateur should avoid getting involved in, and if so why?

It was only a few decades ago that DIY car repairs was very much the norm. Many motorists had the practical skills and knowledge to fix the cars then in use – cars were very much simpler and more often than not their fathers, uncles, older brothers or somebody they knew well had taught them those skills – that was in those days very much the culture amongst the majority of drivers.

Only people with money, or driving company cars, went to garages, the majority of which were dealerships charging prices beyond the pocket of the average working man running a car. It should also be remembered that the British economy was largely based on manufacturing, and a much higher proportion of the adult population had the appropriate practical skills needed to carry out the relatively rudimentary repairs the cars of the day required.

But the world has changed – in three key ways. Firstly the skills base in the population these days is far more skewed to service industries. Secondly modern vehicles are far more complex. And thirdly, the MOT has changed too.

These days, in important areas the MOT Test cannot be mimicked ‘at home’ by the amateur DIY mechanic – he or she would need a roller brake test machine, a four gas analyser and if the car has a diesel engine, a diesel smoke meter.

And they do not have the training required to properly decide that the repair has been carried out satisfactorily.

Ask any MOT Tester and you will be told about cars being returned for re-Test which fail because the repair (performed by a non-MOT garage) had not been properly carried out. More often than not this applies when the repair is done by the owner, or a friend, or relative ‘in the business’. But it is not unknown for repairs carried out professionally at repair garages which are not also Testing Stations, to fail to come ‘up to scratch’, resulting in a failure on re-Test.

Lacking the Tester’s training, and without the appropriate MOT equipment they make mistakes, albeit by inadvertence. Perhaps the brakes are out of balance, or the emissions are still unsatisfactory (often impossible to fix on modern cars without the appropriate diagnostic equipment!), and quite frequently that welding job just wasn’t done in the correct way to comply with the Government’s strict rules on welding repairs associated with an MOT failure – and if the Tester is faced with a welding repair covered in underseal so he just cannot satisfactorily check that it was done correctly he may ask for the underseal to be removed before he or she feels able to decide whether or not it is acceptable.

The MOT is primarily about road safety – that’s why it’s there. So not only will unsatisfactory MOT repairs cost more in the long run to the individual who will lose time, and money through an avoidable re-Test failure, the car will be a threat to road safety whilst being driven to and from the Testing Station – and, of course, the insurance may also be invalidated if an unsatisfactory repair effectively renders the vehicle unroadworthy!

Of course, the individual has the right to repair their own vehicle, and if they have the appropriate skills and access to the correct equipment to ensure the work has been carried out satisfactorily that is fine.

But without those skills and equipment they are effectively taking a chance that it will pass the MOT on re-Test, taking a chance not only on saving money, but also potentially, with their own and other people’s safety.