VOSA report that the economic climate has affected Testing volumes, with heavy goods vehicles (HGV) and public service vehicles (PSV) volumes down, while MOT Tests of light vehicles and vehicle identity checks (VIC) are up, VOSA speculating that this is a result of motorists hanging on to their vehicles for longer and repairing moderately damaged vehicles.

With an economic downturn, it follows that fewer goods will be transported by road, and this has resulted in reductions in Testing and Licensing volumes.

Headlamp aim was the most common Test fail item, although following changes to make the headlamp aim standards easier to understand the previous 20.7% failure rate has decreased to 12.8% of vehicles.

The number of HGV roadworthiness checks increased significantly in 2009/10 following a Secretary of State target to take dangerous vehicles and drivers off the road.

Fixed penalties have been introduced for obstruction to the forward view of the road and anecdotal evidence suggests that this has had a strong deterrent effect, drivers not wishing to lose part of their fixed fee for a journey on a fixed penalty.

The MOT Scheme and Light Vehicles 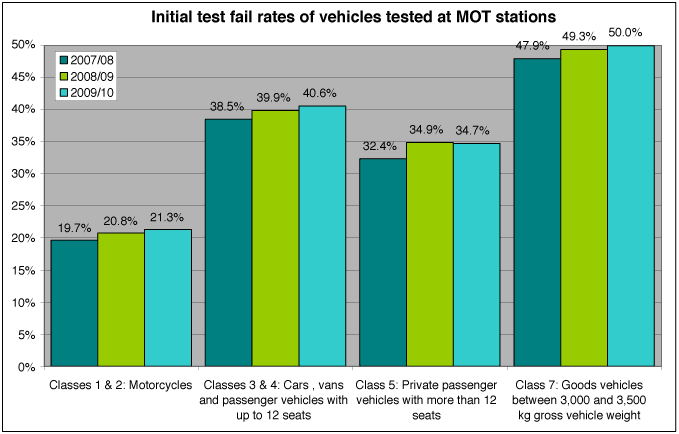 On average 2.11 defects were found for each motorcycle initial Test failure, 3.18 defects for cars and light vans and 3.44 for private passenger vehicles.

Lighting and signalling was the most common fail item for all classes.

VOSA employs many methods to monitor MOT Testing Stations – ‘Mystery Shopper’ or ‘incognito’ excercises, where a vehicle with known defects is taken to an MOT Testing Station to be Tested, and the results noted; covert surveillance, where the comings and goings of vehicles into the garage doing the Test are monitored from a nearby property, often while simultaneously comparing entries which are being made on the MOT computer.

The decision to undertake these activites may be prompted by complaints from the public, disgruntled employees (an MOT Tester being forced to increase his failure rate for example), or simply by comparing the garage’s Test data on the MOT computer with a similar business nearby or nationally.

Another recently introduced quality check operation involves VOSA officials appearing after a member of the public’s vehicle has been Tested and immediately re-Testing the vehicle. Their result is compared to the result entered by the Tester onto the MOT computer. A serious discrepancy could result in disciplinary action being taken against the garage, Tester, or both.

VOSA also carry out what are known as ‘desk-based assessments’, where garages are assessed during a visit which is designed to determine the quality of service and practical and technical skills at any MOT Testing garage. This is known as the ‘Traffic Light’ scheme, as garages are categorised as ‘red’ – needing urgent attention to remedy serious defects prevalent at the garage, ‘amber’ – where the garage is in need of some attention and monitoring to improve its quality of service, or ‘green’, denoting that the garage provides an acceptable level of service.

The number of Nominated Testers* disqualified from testing (also after appeal) decreased from 132 in 2008/09 to 128.

*The person licenced by VOSA to operate a Vehicle Testing Station (VTS), who may also be a ‘Nominated Tester’ – a person who is licenced to carry out MOT Tests at a VTS.

This involves a recently Tested vehicle being re-examined by a Vehicle Examiner (a VOSA Employee) nationally, on a random basis, to establish that vehicles are being given the right Test result.

17.7% re-inspected vehicles were found to have been given the wrong Test result, an increase of 15.4% from 2008/9. However, the difference may be within the limits of normal statistical variation.

Headlamp aim accounted for 8-9% of the errors.

The Single Vehicle Approval scheme is a pre-registration inspection for vehicles that haven’t been type approved to British or European standards. The purpose of the scheme is to ensure that these vehicles are designed and constructed to suitable safety standards before they are used on public roads.

The decrease may largely be due to the fact that the SVA scheme is being replaced by the more robust European Whole Vehicle Approval Scheme.

The Vehicle Identity Check is a scheme to help stop stolen cars being passed off as repaired accident damaged cars. This is also known as ‘ringing’.

34% of all defects found were design-manufactured (as in 2008/09) and 9.0% were due to lack of maintenance (an increase from 8.0% in 2008/09). As a result of safety defect investigations, 28 safety recalls, 11 manufacturer production changes and 17 technical service bulletins were issued.

As in 2008/09, HGVs made up the largest number of vehicles checked. Roadworthiness prohibition rates increased for both HGVs and PSVs.